November 1: "Ending Female Genital Mutilation and Child Marriage in This Country and Around the World" 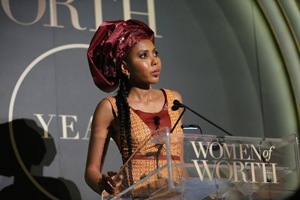 Garden City, NY — Jaha Dukureh, a survivor of female genital mutilation (FGM) and forced child marriage, will speak at Nassau Community College about Ending Female Genital Mutilation and Child Marriage in This Country and Around the World on Wednesday, November 1 at 9:30 a.m. and again at 12:30 p.m. in the Multipurpose Room of the College Center Building. Jaha Dukureh was named one of Time Magazine's 100 Most Influential people in the world. Confronting her past, her family, her culture, her religion and its leaders, Dukureh became a lightning rod for change in Gambia, with her work contributing to the eventual governmental ban on FGM and child marriage. In the United States, where she now lives, the founder of the non-profit Safe Hands for Girls also gathered national grassroots support to call for the first national survey in the U.S. to determine the prevalence of Female Genital Mutilation in this country. Her campaign received backing from former UN Secretary General Ban Ki-Moon and members of Congress. Duhureh is the subject of The Guardian and Accidental Pictures' documentary Jaha's Promise, that premiered with a screening followed by a panel discussion at the United Nations in June of 2017. For more information about Ending Female Genital Mutilation and Child Marriage in This Country and Around the World, which is free, open to the public and accessible to the disabled, call 516.572.7148. Media Contact Alicia Steger 516.572.9634 alicia.steger@ncc.edu ncc.edu/newsreleases

About Nassau Community College Nassau Community College, part of The State University of New York, is an institution where nearly 20,000 full- and part-time students and approximately 10,000 continuing and professional students start and continue their successful journey through higher education. More than 70 fields of study are offered on a 225-acre campus located in the center of Long Island. As the largest single-campus two-year college in New York State, Nassau Community College maintains a national reputation for excellence. Visit www.ncc.edu for more information.